For 20 years, Yonder Mountain String Band has been redefining bluegrass music, by pushing the envelope into realms of rock n' roll and improvisation.

NOTE: Make sure the kids are out of the room before pressing play on @YonderMountain String Band's new tune/video https://www.jambase.com/article/yonder-mountain-string-band-cant-shit-your-pants-if-youre-wearing-a-dress-video 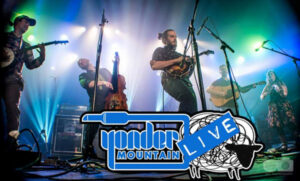